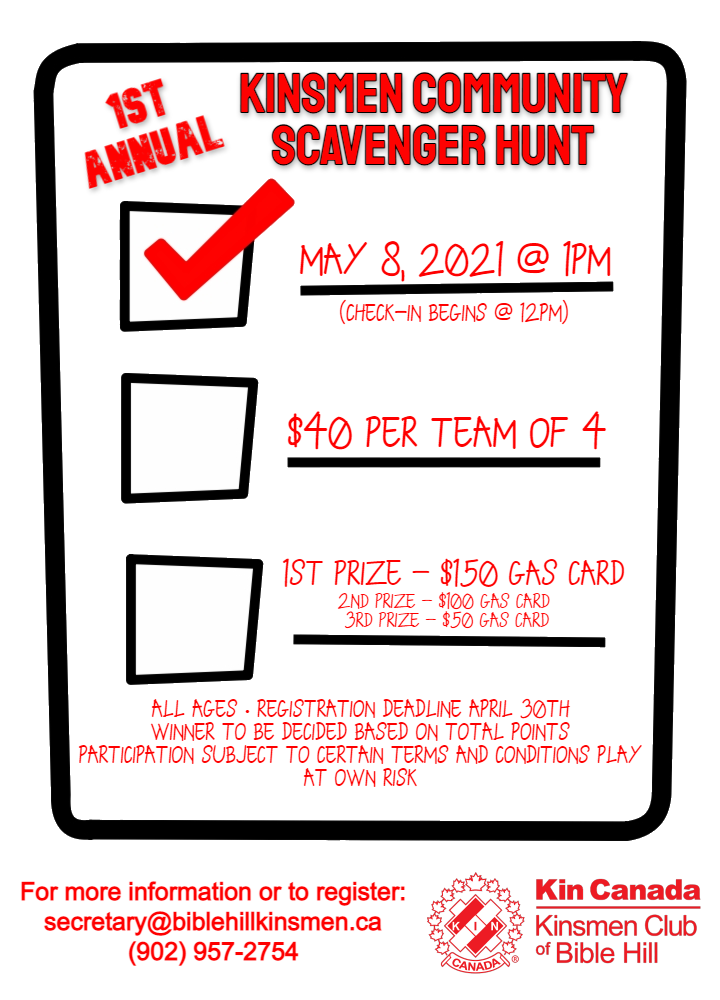 We’ve all been a little cooped up over the last year, but now that the warmer weather is on the way the Bible Hill Kinsmen offer you a chance to get outside and have some fun – the Kinsmen Community Scavenger Hunt!

Teams of 4 with members of all ages will hop in the car and cruise around town searching for items on the Scavenger Hunt list. Items will be all shapes and sizes, ranging from common to quite unique. Each item will be worth a designated number of points, and the team with the highest score wins! This will not be a timed event, but once you arrive at the final checkpoint your score will be final and you will not be able to continue your search.

Registration is $40 per team. For more information, or to register, email secretary@biblehillkinsmen.ca or call (902) 957-2754. The registration form can be downloaded here.

**Participation is subject to certain terms and conditions. Play at own risk.** 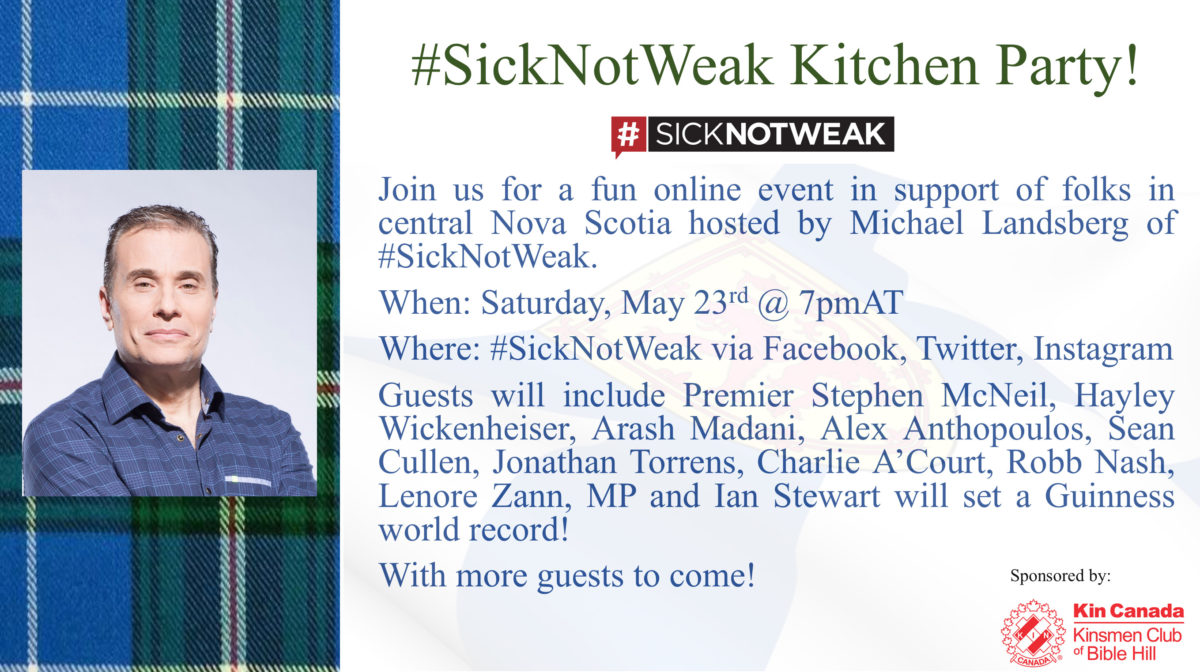 (Truro, NS) – Online mental health organization #SickNotWeak announced today they will be hosting an virtual Kitchen Party this Saturday in support of all the folks in Nova Scotia and all they have been dealing with in recent weeks.

The event will be hosted by #SickNotWeak founder and media personality Michael Landsberg and feature a variety of guests including Premier Stephen McNeil, MP Lenore Zann, former Blue Jays GM and now Braves President Alex Anthopoulos, Sportsnet’s Arash Madani, hockey legend Hayley Wickenheiser, actor Jonathan Torrens, musicians Charlie A’Court and Robb Nash, comedian Sean Cullen, magician Ian Stewart (who will attempt to set a Guinness World Record for “most beer bottles opened with a chainsaw” because, why not?) and local first responders from Colchester County. More guests will be announced as they are confirmed.

“While 2020 has pretty much sucked for everyone, its been particularly hard on folks in Nova Scotia,” Landsberg said. “The goal of #SickNotWeak is always to offer a different take on mental health – one that’s more real and less clinical. So hosting something for folks who have been through so much already this year was a no-brainer for us.”

Sponsored by the Bible Hill Kinsmen, the event will be free to attend online (hosted on #SickNotWeak’s website, Facebook and Twitter sites) and open to anyone who wants to attend.

“People around here need a great big virtual hug,” said Quinn McCarthy of the Bible Hill Kinsmen. “I’m really excited to see so many great people coming together to help people here in central Nova Scotia get through what has been a really tough year so far.”

Since the start of 2020, Nova Scotia – and particularly Colchester County – have endured a number of unprecedented tragedies. Like the rest of the world, they are locked down with the covid19 pandemic but they have also had to deal with the Portapique mass shooting, the crash of an RCAF CH-148 Cyclone that claimed two local lives, the crash of an RCAF Snowbird that claimed the life of Capt. Jenn Casey (a Halifax native) as well as other local events. As a tight-knit, largely rural community, not being able to gather to properly grieve these events has been particularly hard. We hope that events like this will help people come together online.

Kevin Croft was a devoted member of our club, and the community at large; he truly exemplified what it is to be a Kinsmen. It is our great pleasure to award this bursary in his memory.

This bursary is limited to Cobequid Educational Centre students.

Thank you to everyone who supported the 7th Annual Great Trivia Challenge! Your contributions will help our club’s community initiatives, and the Colchester Community Workshops Foundation as they renovate their new facility. We hope you all had as much fun as we did! 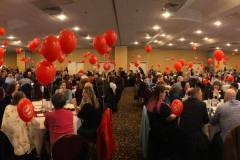 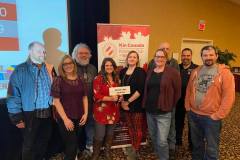 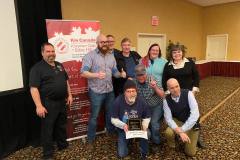 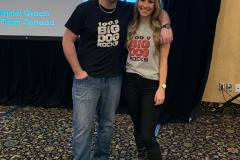 Do you (or your kids) have a great idea to help our community? We will help you fund it! Plus, your project qualifies for an additional $2500 to build on its success! 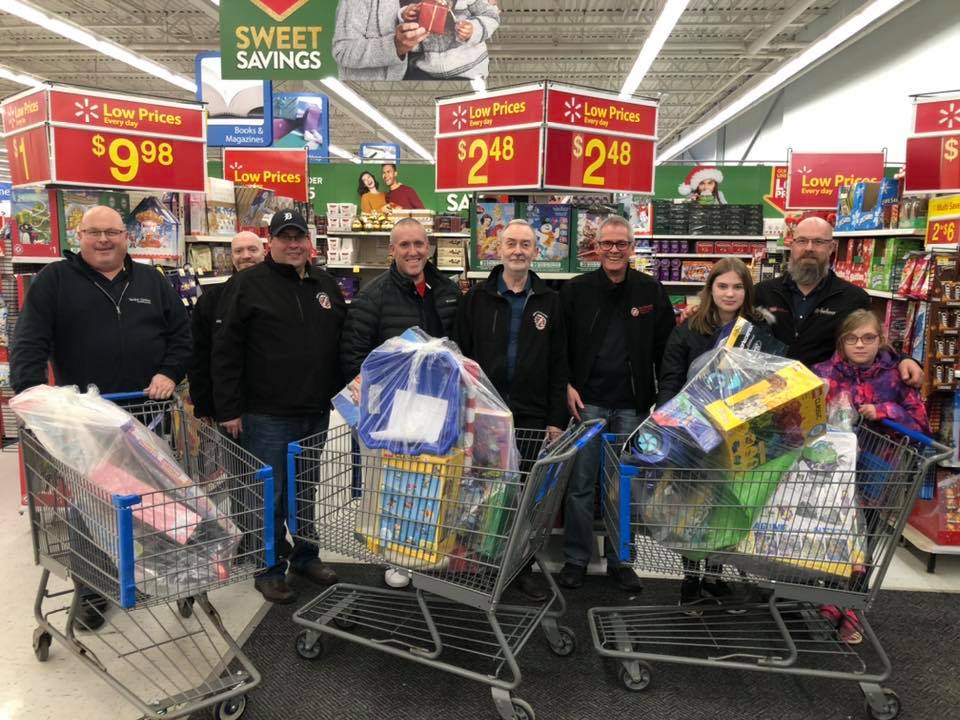 Happy Holidays from the Kinsmen Club of Bible Hill!

We would like to thank you for supporting our annual Kinsmen Teddy Bear Toss with the Truro Jr. A Bearcats. During the November 30th game against the South Shore Lumberjacks, a record-breaking 341 teddy bears rained down on the ice after Bearcats winger Cole Julian scored 4:20 into the first period. All bears collected will be donated to children in Colchester County through the Christmas Index.

In addition to the Teddy Bear Toss, the Kinsmen Club of Bible Hill also supports several families through the Christmas Index by purchasing toys and other gifts for under the tree, and boxes of food for a delicious holiday feast. The annual Christmas Index shopping trip is something our members look forward to – we get just as excited to play with the toys as the children who receive them!

Do you have plans for New Year’s Eve? Consider spending it with Rock & Roll Hall of Famer Burton Cummings. Use promo code “KINSMEN” when you buy your tickets and $10 from each one sold will be donated to our club! Join us at the Rath Eastlink Community Centre to welcome 2020, and support our community’s greatest need. Visit www.biblehillkinsmen.ca for more information and a link to purchase tickets.

As 2019 comes to a close we have been reflecting on what an incredible year it has been for our club, and we owe it all to our community! We cannot thank you enough for supporting our community initiatives and fundraisers such as the Colchester Book Fair, the Kinsmen Kanteen at the NSPE, and The Great Trivia Challenge. The 2020 edition of The Great Trivia Challenge will be held on February 29th, and, due to the popularity of this event, we are anticipating yet another sell-out! Don’t miss your chance to play; more information on how to secure your team’s spot will be released in January.

The Kinsmen Club of Bible Hill would like to wish you and your family a Merry Christmas, and all the best in the new year. Looking for a New Year’s Resolution? Why not get more involved in your community? Join the Kinsmen Club; we meet on the first and third Thursday of the month, from September to June, at the Douglas Street Recreation Centre. Visit one of our meetings, or email president@biblehillkinsmen.ca to learn more. 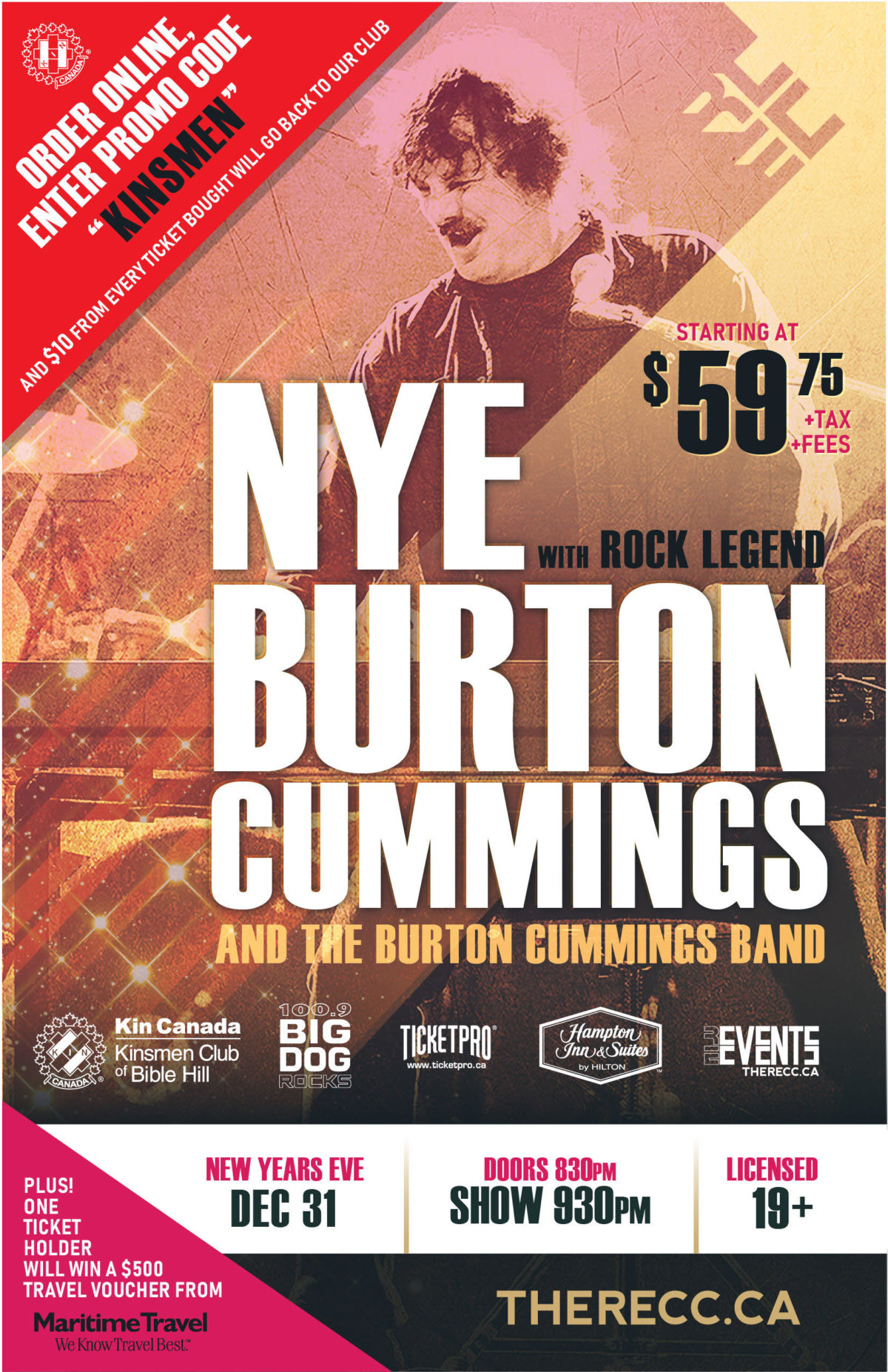 Use promo code “kinsmen” when you buy your tickets and $10 from each one sold will be donated to our club! Join us at the Rath Eastlink Community Centre to welcome 2020, and support our community’s greatest need!

In the 17 years of the program, the Bible Hill Kinsmen, in partnership with the Truro Bearcats, has donated $79,800. 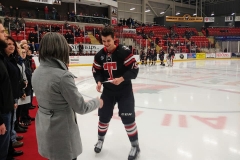 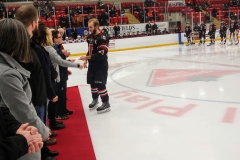 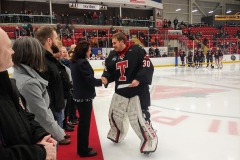