A sign was recently installed to recognize the Victoria Park Kinsmen Playground. Truro Mayor Bill Mills and Kin Canada National President James Doerr were on hand with a number of Kinsmen for an official unveiling on Thursday.

The Kinsmen Club of Bible Hill is in the middle of a five-year, $25,000 commitment for playground upgrades in Victoria Park. Kinsmen, both the club in Bible Hill and Truro before them, have long supported the park.

The play area was built in 1952 with swings and other equipment. Modern facilities, such as the swimming pool, were built in 1959 with the support of a number of local groups. The Dr. Jim Vibert Trail, dedicated after the prominent Truro surgeon, was established by the Kinsmen in the 1970s.

More recently, the playground and baseball diamond saw major upgrades in 1994 and 2000, when washrooms and new playground equipment was installed. That work was partly funded by the Truro Kinsmen. A joint effort between the Kinsmen and the town led to the addition of the water spray park.

It’s just one way the Kinsmen Club of Bible Hill is able to fulfill its motto of “Serving the Community’s Greatest Need”. 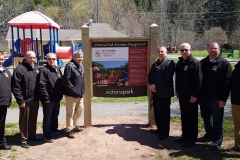 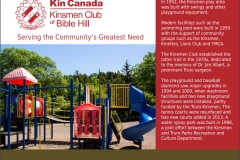 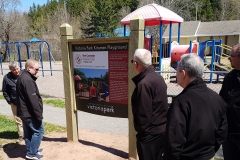